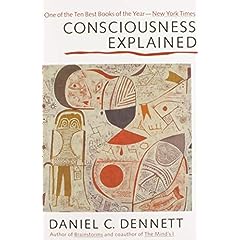 Editorial Reviews (from Amazon.com)
Consciousness is notoriously difficult to explain. On one hand, there are facts about conscious experience–the way clarinets sound, the way lemonade tastes–that we know subjectively, from the inside. On the other hand, such facts are not readily accommodated in the objective world described by science. How, after all, could the reediness of clarinets or the tartness of lemonade be predicted in advance? Central to Daniel C. Dennett’s attempt to resolve this dilemma is the “heterophenomenological” method, which treats reports of introspection nontraditionally–not as evidence to be used in explaining consciousness, but as data to be explained. Using this method, Dennett argues against the myth of the Cartesian theater–the idea that consciousness can be precisely located in space or in time. To replace the Cartesian theater, he introduces his own multiple drafts model of consciousness, in which the mind is a bubbling congeries of unsupervised parallel processing. Finally, Dennett tackles the conventional philosophical questions about consciousness, taking issue not only with the traditional answers but also with the traditional methodology by which they were reached.
Dennett’s writing, while always serious, is never solemn; who would have thought that combining philosophy, psychology, and neuroscience could be such fun? Not every reader will be convinced that Dennett has succeeded in explaining consciousness; many will feel that his account fails to capture essential features of conscious experience. But none will want to deny that the attempt was well worth making. –Glenn Branch